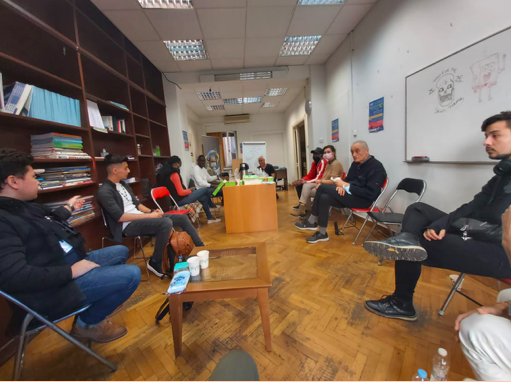 During the expanding and networking meetings with stakeholders on the support process of NEETs in Greece, an interesting approach about the mentoring services towards NEETs refugees was suggested: to train successful refugees entrepreneurs in order to become mentors for NEETs refugees interested in entrepreneurship. Through this approach, mentors could share their experience in the establishment and running of a successful business in Greece, with young refugees interested in self-employment. A mentoring relationship is expected to support NEETs refugees to understand possible challenges which they might encounter along the way, to avoid barriers and to tackle problems while planning and running their own enterprises, increasing this way their sustainability prospects.

The Greek partners of the project, that is Agricultural University of Athens and Development Agency of Karditsa S.A.(AN.KA. S.A.) with the support of KIZ SINNOVA & Youth Business International expertise partners of the project “YOUNG ENTREPRENEURS SUCCEED” (YES!) decided to experiment with this approach, by organizing a mentoring workshop with the participation of candidate mentors and mentees coming from the refugee community. To this end, a Mentoring Training Workshop for refugees mentors and mentees took place last November in Athens, in collaboration with two refugee and migrant-led organizations, namely the “Greek Forum for Refugees” and the “Forum of Migrants”. In total, 12 participants were trained to become more familiar with the notion of mentoring, the value and expectations deriving from a mentoring relationship, the role of mentors and mentees, while they voiced questions/remarks related to mentoring. They all agreed that the mentoring service could be really helpful for young refugees and migrants and committed to work towards the establishment of mentoring relationships, as soon as possible.

Following the workshop, the Development Agency of Karditsa in collaboration with “Greek Forum for Refugees” collected expressions of interest by candidate mentors and mentees, within the refugee community. Thus, the first five mentoring relationships between French-speaking refugees are to be launched. The initial mentoring sessions are planned to be held in Athens, until the end of March.