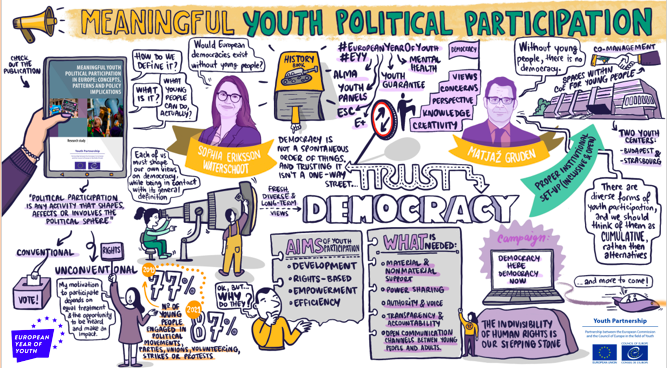 How much is youth political participation in Europe, to make the voice of younger generations heard? Few weeks ago, the EU-CoE (College of Europe) youth partnership, a co-operation programme between European Commission and the Council of Europe, presented – in the context of the broader European Year of Youth – this study: “Meaningful youth political participation in Europe: concept, patterns and policy implications”.

Taking into consideration that the European Union, as a democratic political system, needs youth political participation to be considered as such, the study reflects on the importance of youth participation into decision making processes and on the ways through which European institutions should encourage young people’s interest on political and civic space.

Starting from the definition of political participation as “any activity that shapes affects or involve the political sphere”, we can assume that there are very different ways and tools to operate into the political context. Moreover, there are also different motivations that push young people to be active in this field. The main affecting aspects correspond to the opportunity to be heard and to make a concrete impact on the system. Of course, young people participation strongly depends on the living context, the socio-political environment and socio-economic backgrounds, such as income, education, gender etc.; but the study affirms that youth interest and participation in politics are increased during the last two years.

So, the question is: why should young people participate into the political debate? First, the development of a political and civic consciousness and awareness is an opportunity to take part to and promote a right based political system and empower its own rights through actions, making sure that young people requests represent a priority for policies.

Instead, at the same time, young people may refrain to participate if they feel invisible, not heard and perceive that youth issues are not part of political agendas. For this reason, it’s important that establishment of youth councils at local, regional, and national levels send an important message to the political authorities regarding the commitment towards including young people into decision making processes.

In fact, as Sophia Eriksson Waterschoot – Director for Youth, Education and Erasmus+ at theEuropean Commission – wondered, would European democracies exist without youth participation?

«Promoting young participation is actually an essential step in the constant renewal democracies». Democracy is not a natural phenomenon in humanity history, so each citizen and each generation should construct its own relationship with democracy, shaping policies and stablishing trust.

The same point of view was shared by Matjaz Gruden – Director of the democratic Participation Directorate at the Council of Europe -, who stressed that «democracies without young people are not democracies»; indeed, the youth activism represents its foundation.

Both representatives of the main European institutions agreed that sometimes it is difficult to achieve young people’s involvement into politics system because it requires a proper institutional set up, designed to be inclusive and open to possibilities and investments for youth. Due to the pluralism and heterogeneity of young people’s voices, the definition of youth participation couldn’t be represented in a univocal process, but it must include plurality, different political and culture preferences. But that’s what makes the strength of democracy.

So, how could the political institutions include young people into their agendas and activities? Providing material and non-material support is the basis to make sure they are included into decision-making process; also, ensuring that they have power of sharing and feeling that they can have an impact on political decisions or influence the process. Again, the institutions must guarantee that young people have authority and voice to be heard, generating transparency and accountability into systems, and offering open information and communication channels where young people and political makers can discuss.

In occasion of the European Year of Youth (2022), the European Commission and the Council of Europe promote and organise a lot of possibilities for youth, aiming to empower and support young people to be active and actors of change.

For example, the European Commission created a series of initiatives to promote discussion and dialogue, such as the Conference of the future of Europe and the Youth dialogues, two ways to make young people voices heard, and the Citizens panels, of which one third is composed only by youth. In parallel, it could find all Flagship initiatives and Erasmus +, concrete programmes aimed to close together young people with EU political decision makers.

In the same way, the Council of Europe tries to integrate young people into intergovernmental systems on the design actions policies too. The priorities of strategies correspond in putting in place tools to identify and respond to the challenges. The main effort in this sense is the launch of the campaign “Democracy here. Democracy now.”, developed for the whole year and dealing with three main themes: democracy and access to rights, meaningful youth participation and digitalisation.

In listing all these activities, it seems that youth inclusion is a horizontal priority for both institutions, which have the task of developing a good policy making and encouraging the apply for all activities. In fact, without a realistic effort to involve and hear young people voice, the risk could be that that activism may turn into frustration, concerns, and search for alternatives.

European institutions have settled the instruments, important points from where build strategies, but to continue to make an effort, it is important to develop specific strategies and frameworks, giving opportunities to all, involving national agencies and organisations, for a different capacity building process able to better address the inclusion of youth.