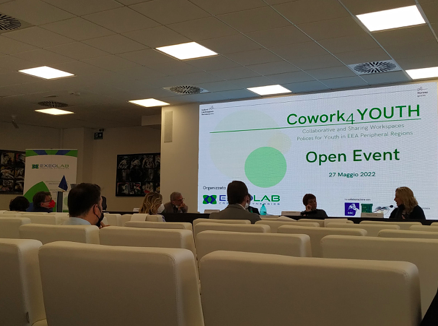 The Open Event for Cowork4YOUTH took place on May 27th at Polo Bibliotecario in Potenza, Italy, organised by Cowork4YOUTH partner Exeo Lab srl. The event had the form of a double “clustering event”, as it was immediately followed by an event dedicated to the mature YOUTHShare project, another member of the EEA and Norway Grants Fund for Youth Employment family, with the goal of exchanging experiences and insights. Besides the researchers who presented on behalf of the project, guest speakers included local policy makers, stakeholders and representatives of the Fund Operator. The event was a success, as the progress of Cowork4YOUTH was presented and discussed, as well as the next steps. Particularly important was the interaction with the local stakeholders and policymakers, who had the chance to present the local perspective and give important insight for the future development of the project.

The Open Event was moderated by Mr Maurizio Zammataro, expert in the field of employment policies and strategies.

Present at the event was Mr Gian Luca Bombarda, Fund Director of the EEA & Norway Grants Fund for Youth Employment, who addressed the complexity of the issues surrounding youth employment and underlined the need to work hard in order to improve the current situation. Mr. Bombarda also stressed the importance of synergies between EEA and Norway Grants Projects, mentioning that wider clustering initiatives are on the way. The event was also greeted by Mr Allessandro Galella, councillor for economic development, labour and community services of the Basilicata region, before Mr Nicola Vita, co-founder and Head of international projects area at Exeo Lab Srl, presented the agenda of the day.

First speaker of the event was the Principal Investigator of Cowork4YOUTH, Mr Vasilis Avdikos of the Institute of Urban Environment and Human Resources of Panteion University, Athens. He presented the project and its objectives: to increase knowledge and offer concrete suggestions against youth disengagement in peripheral/ non-metropolitan EEA regions. He further referred to the solutions to be tested towards achieving a living wage through alternative practices: platform economy and collaborative work practices, that act as “learning middlegrounds”. Mr Avdikos also talked about a trend of inequalities between north and south regions and the need to look for more efficient ways to tackle youth unemployment and disengagement, especially for NEETs.

Mr Kostas Gourzis, senior researcher at the Cowork4YOUTH project, presented the Transnational Research Network, which aims to align the participating research teams and individual researchers into a common strategy and to facilitate a discussion on youth employment and the pertinent policy framework. He also presented the Cowork4YOUTH Online Observatory for youth employment and how its establishment will tackle  problems faced by existing observatories that, due to their narrow geographical scope and limited time frame, tend to provide a fragmented view and miss core data. The main goals of the Online Observatory are to monitor youth employment in the regions under study, to visualize the data and to disseminate the project’s findings.

Concluding the presentation of Cowork4YOUTH and its progress, Ms Elish Kelly, senior research officer at the Economic and Social Research Institute (ESRI), talked about the objective of the baseline study regarding the impact of youth employment policies, which is to compile descriptive evidence on NEET and youth employment rates across EEA countries and specifically Greece, Italy, Spain and Ireland. Ms Kelly showed some results from Italy, where youth employment was 40% pre-recession (2008), but hit a low point in 2014. Following some years of gradual improvement, youth employment in Italy once again took a dive in 2020 due to the COVID-19 pandemic. Ms Kelly also addressed the subject of employment rates in key tourism regions in Italy between 2008 and 2020 and specifically the regions of Sardegna and Basilicata, where rates are below the national average.

The main session was followed by a round table discussion with the theme of Innovating Youth Labour Policies, with the participation of Mr Maurizio Scorcioni, Data Science Manager at ANPAL services s.p.a, Mr Sergio Bellucci, expert in labour and digital transformation, Ms Lea Battistoni, expert in the field of employment policies, and Ms Tiziana Lang, Head Secretary of the Secretariat of the Ministry of Labor and Social Policies. Mr Sorcioni presented some data concerning the region of Basilicata where 53% of NEETs are in a “permanent status”, and most have a high school diploma with no further aspirations. Other subjects touched upon by the guest speakers included the importance of skill enhancement; the impact of digital technology in industrialised production; the need for comprehensive planning and improved youth participation in social innovation; the importance of both micro-interventions and macro-actions; and the need for adjustments to the labour market model to take social issues into account.

The fruitful discussions and interaction between guests and members of the Cowork4YOUTH project marked the success of the Open Event. The added value of the clustering event and the potential for synergies that it unlocked between the YOUTHShare and Cowork4YOUTH projects, will surely be seen in the future.