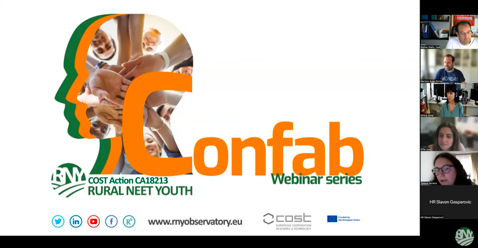 YOUTHShare was honourably invited at the 2nd CONFAB Webinar, a series of monthly webinars organised by the Rural NEET Youth Network (RNYN) in the framework of “COST Action CA18213: Rural NEET Youth  Network (RNYN): Modeling the risks underlying rural NEETs social exclusion”. The network is focused on rural NEETs and it includes 33 grand countriesand more than 100 participants from several other ones. RNYN intends to establish a network with representation of multi-stakeholders from these 33 countries; to cultivate knowledge, skills and best practices; to find key issues that can promote and develop public policies; to support various stakeholders in rural areas; and last but not least, to develop an online observatory that will develop a common-based, open-access research platform enriched with information regarding rural NEETs.

Ms Effie Emmanouil, PhD Candidate in Economic and Labour Geography at the University of the Aegean under scholarship by the YOUTHShare project talked about the paper “Spatialities of being a young NEET in an era of turbulence: a critical account of regional resilience across the Mediterranean EU South” that is under publication in the Journal of Youth Studies. With reference period from 2008 to 2018 and Cyprus, Italy, Spain and Greece as case studies, the paper’s aim is “a theoretical advancement of how resistance against external shocks could be conceptualised across the young cohorts of the labour force”. Among the conclusions of the study, are that geography and history have a significant role in youth labour markets (path-dependent processes); employers do not want to employ low-skilled people or people with specific religious patterns (labour market segmentation); and that there are regions specialised in sectors where low paid jobs prevail, such as agricultural labour with inferior position in the international division of labour (structural deficiencies).

Ms Athina Avagianou, also a YOUTHSHare PhD Candidate studying the policy framework of coworking spaces and the impact on youth, talked about “Being NEET in youthspaces of the EU South: A post-recession regional perspective” and shared some of the findings from the research focusing on youth vulnerability. The study areas were also regions of Greece, Spain, Italy and Cyprus, from 2008 to 2018, targeted on young people 25-29 with a particular focus on women. The overall conclusion is that vulnerability is linked to peripheral youthspaces of the EU South; and more specifically, that there are regional structures and dynamics regarding the economic specialisation of the regions that affect the NEET rates; that formal institutions need to enhance their role in employment and training/ education policies; and lastly, another factor that should be taken into consideration is the role of social ties and multi-scale agency of various actors (gender and class restrains).

Associate Professor Stelios Giallis, Principal Investigator & Coordinator of the YOUTHShare project, talked about “Explaining NEETs’ persistence in Southern EU: key underlying remarks and factors”, summarising and presenting arguments for wider research. Professor Gialis referred to five factors that determine the high prevalence of NEETs in EU South: Firstly, the socio-economically deprived youthspaces where many NEETs can be found – poorer regions, isolated regions, or less affluent spaces within rich regions that attract or reproduce NEETs’ phenomenon; a second factor is that these young people are mostly concentrated in peripheral and marginalised areas and they experience economic, social or psychological exclusion, which is related to the remoteness and isolation of their areas; third is that the level of economic prosperity, as well as the specialisation of the region, are factors that are strongly related to youth unemployment and inactivity – as in the case, for example, of regions with touristic specialisation which present high NEET rates; the fourth factor is poor functioning of institutions (e.g. education, employment protection) in these regions; finally, the fifth factor concerns the role of informal practices and informal institutions like family networks. In conclusion, Professor Gialis made special mention to policy proposals that include strong welfare policies and youth-oriented socio-economic practices, as well as the creation of new socio-economic regimes that lead to good, well-paid jobs for youth.

The presentation was followed by fruitful discussion between the participants.