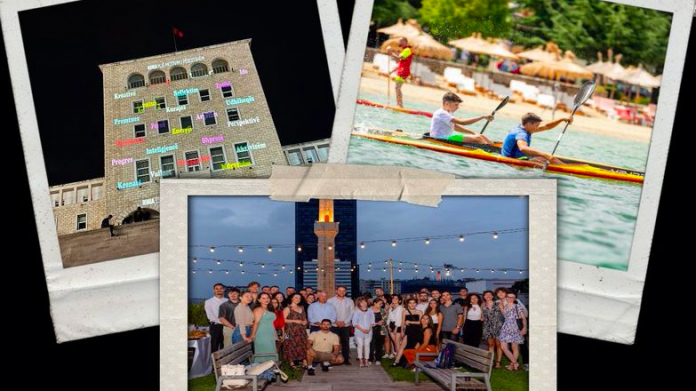 Summer 2022, even though ended quite quickly for Tirana EYC 2022, paved the way to an autumn full of fun activities of youth, inspired by the vibes and energies built from it. Summer found Tirana buzzing with the energy of young people. Of course, it could not have been otherwise this time, because it is the Year of Youth, full of life and positive energy that only young people can bring to the city.

So, what were the fun activities happening? On International Youth Day, on August 12, the Tirana Polytechnic University’s building looked like a “postcard” filled with messages from young people.

The National Youth Congress, within the framework of “Tirana European Youth Capital 2022”, organized a series of activities that focused on youth stories and messages, both different and original, all these designed by the young people of Albania and the city of Tirana themselves. Ms. Dafina Peci, Executive Director of the National Youth Congress said on this occasion: “History never stops proving that there is always a time for youth! All initiatives implemented by young people, organizations, partners, and donors are in full synergy. The time awaits us to build on what is being designed and invested throughout this year.”

Later on , 40 young people aged between 18 and 24 were selected to be the pioneers of the first OriginAL experience in Albania and Kosovo. The young people from the diaspora chose to spend this summer visiting Kosovo and Albania for 10 days to get to know their origins better. The participants were from 15 different countries and had only one thing in common – Albanian origin. They represented second and third-generation immigrants who, even though born and raised in different and multi-ethnic cultures, were eager to discover their roots. They visited Pristina, Mitrovica, Prizren, Gjakova, Lezha, Vlora, Berat, Kruja, and finally in the Albanian capital, Tirana, where on the premises of Tirana EYC 2022 they also held a workshop on public activation and participation in society.

But Tirana, the European Capital of Youth wasn’t the only city buzzing with the energy.

During the three days of August 12-13-14, the city of Pogradec, in addition to vacationers, was also energized by young people from Albania and their peers from Kosovo and North Macedonia who performed a series of sports and water activities, within “Canoe Racing Pogradec 2022”. On the last day, a canoe race was held for the first time in Pogradec, where there were winners in the categories of children, girls, and boys. Present at this activity, the General Coordinator of Tirana EYC 2022 – KRK, Mrs. Aspasjana Kongo explained that the goal of this event is to encourage both local and foreign tourists to visit Pogradec and to experience water sports in the city. Pogradec organizers called this a first pilot project which will be followed by many others, aiming to involve not just Albanians but also young people from beyond the borders of the country.

This upcoming Autumn is already taking shape and filled with plenty more opportunities for young people to participate in and engage. Stay tuned…