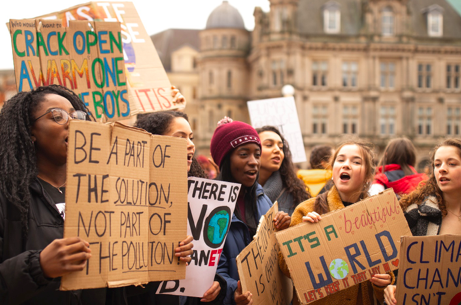 Sizzling hot summers, freezing cold winters, melting glaciers and rising sea levels are just some of the most concerning issues of the 21st century. The climate change topic has been largely debated over the past few years, but the truth is, this problem goes back to the 1980s, when the effects of human-generated greenhouse gas emissions have started to kick in.

Severe drought in Pakistan, wildfires in California and bushfires in Australia, along massive floods in South Africa show us that no matter how much power or resources a country has, the increase of global annual temperature is threatening to put a stop on the achievement of the 17 Sustainable Development Goals (SDGs). And, to prevent this from happening, we believe that stimulating the participation of youth in the global warming debate could represent a chance at saving The Planet.

The role of Youth in the context of climate emergency

Whether you wish to join a group or take action on your own, every little thing you do in hope to minimaze the climate change impact, is a great deal to the world! But to understand how it works, we first need to go to the roots of the problem.

Simply put, the main responsible „enemies” for this change of weather patterns are the greenhouse gas emissions, a result of human activity: the use of electricity, burning of fossil fuels, deforestation, production of goods, agriculture and many more. Youths, as well as people of all ages, can reduce their carbon footprint, by paying attention to small things: turning off the tap when you’re not using water anymore, unplugging the unnecessary electronic devices, going for a walk or bike ride – instead of taking the car, using renewable energy sources, recycling more, using less heat, avoiding food waste and planting a tree whenever possible.

If, though, your wish is to get involved in a joint action, many NGOs and foundations would happily take you on their team! Not only is the youth movement encouraged in the context of climate emergency, but it also brings a new perspective to the table, showing that it is still possible to correct the mistakes of past generations and learn from their experiences, in order to create a safer and healthier home for the future. In doing so, young people are given a seat at the table, and it’s vital for governments and political bodies to take their opinions into consideration. The United Nations, for example, is recognizing the youth power in tackling the climate change issue, by allowing them to adhere to organizations such as the United Nations Joint Framework Initiative on Children – Youth and Climate Change (JFI). Other teens, instead, have joined forces to launch awareness and environmental campaigns or set up foundations, as to attract funds for nature restoration and to develop sustainable solutions.

Age is just a number in fighting climate change, too!

Take the Greta Thunberg example, who, at 15, was protesting outside the Swedish Parliment, after a long series of wildfires in her country. Rapidly, gaining visibility in the public eye, Thunberg soon became perhaps the world’s most famous climate change activist, a role model for children of her age and adults as well.

Speaking at the United Nations Climate Change Conference in 2018, and in the 2019 World Economic Forum, she criticized the world leaders for not taking sufficient responsibility in solving the issue, causing thousands of other students to organize climate strike movements, known as Fridays for Future. Being a Nobel Peace Prize nominee, the now 19-years old girl continues to be a voice for young people in the climate crisis, along other teenagers such as Jamie Margolin, cofounder of Zero Hour, a program for people who wish to get involved and help more, or Isra Hirsi, Nadia Nazar, Xiye Bastida and many others.

There’s still hope to change something for the better, but at the same time, our Planet’s health is deteriorating and more challenges are coming everyday. It’s within our power to allow youth representatives to speak for their generation and to give a try to whatever solutions they might find. In the meantime, do something on your own too! Research, read, learn, understand and stay focused on your path, now with a new approach: do everything you used to do before, but with small adjustments and greater consideration for the environment and its wellbeing.